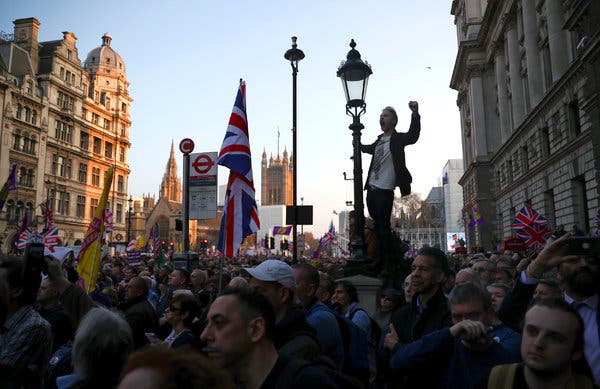 Image
A protester shouting from a lamppost on Friday outside the Houses of Parliament in London.CreditCreditHannah Mckay/Reuters
LONDON — Politico reported the other day that the French European affairs minister, Nathalie Loiseau, had named her cat “Brexit.” Loiseau told the Journal du Dimanche that she chose the name because “he wakes me up every morning meowing to death because he wants to go out, and then when I open the door he stays in the middle, undecided, and then gives me evil looks when I put him out.”

If you can’t take a joke you shouldn’t have come to London right now, because there is political farce everywhere. In truth, though, it’s not very funny. It’s actually tragic. What we’re seeing is a country that’s determined to commit economic suicide but can’t even agree on how to kill itself. It is an epic failure of political leadership.

I say bring back the monarchy. Where have you gone, Queen Elizabeth II, a nation turns its lonely eyes to you.

Seriously, the United Kingdom, the world’s fifth-largest economy — a country whose elites created modern parliamentary democracy, modern banking and finance, the Industrial Revolution and the whole concept of globalization — seems dead-set on quitting the European Union, the world’s largest market for the free movement of goods, capital, services and labor, without a well-conceived plan, or maybe without any plan at all.

David Lindsay Jr.
Hamden, CT | NYT comment.
Thank you Tom Friedman for a great essay. I like many of the popular comments, but have something to add. Angela Merkel let some 1.5 million mostly Syrian refugees into Germany in one year, and caused a backlash protest against too many foreigners too quickly. Refugees from climate change and civil war are increasing dramatically, as populations around the world have exploded. We were 2 billion people around 1930, and we have grown to 7.6 billion in just 89 years. It is probably not going to work, to just let a billion or two billion refugees into the healthier more stable parts of the planet. The EU could help diffuse the brexit movement, with some reforms to limit immigration. The world powers need to help the poorer countries with a host of services, including family planning.
David Lindsay Jr. is the author of “The Tay Son Rebellion, Historical Fiction of Eighteenth Century Vietnam” and blogs at TheTaySonRebellion.com and InconvenientNewsWorldwide.wordpress.com. He performs folk music and stories about Climate Change and the Sixth Extinction.

David Lindsay is the author of "The Tay Son Rebellion, Historical Fiction of Eighteenth- Century Vietnam," that covers a bloody civil war from 1770 to 1802. Find more about it at TheTaySonRebellion.com, also known as, DavidLindsayJr.com. David Lindsay is currently writing about Climate Change and the Sixth Extinction., as well as singing and performing a "folk concert" on Climate Change and the Sixth Extinction. He can be reached at daljr37(at)gmail.com.
View all posts by David Lindsay Jr →
Quote | This entry was posted in Britain, David Lindsay, European Issues, Great Britain, Thomas Friedman, Uncategorized and tagged By Thomas L. Friedman, The United Kingdom Has Gone Mad. Bookmark the permalink.