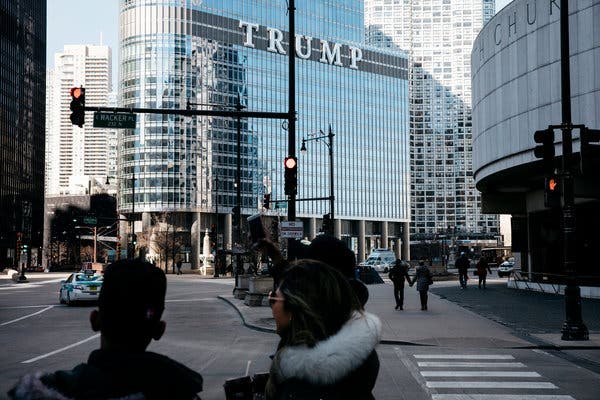 When Donald Trump defaulted on a loan for Trump International Hotel in Chicago, he sued Deutsche Bank, which had lent him the money.CreditCreditDavid Kasnic for The New York Times
Department of Irony: Republicans can’t stop howling about socialism. But nobody makes capitalism look worse than Donald Trump.

The president’s party is trying to set up the 2020 election as a war against the S-word. “America will never be a socialist country,” Trump announced in his last State of the Union speech. At a big gathering of conservatives, Mike Pence warned that “Medicare for all” and the Green New Deal were “the same tired economic theories that have impoverished nations … over the past century. That system is socialism.”

There have certainly been socialist disaster cases around the world, although the Republican definition seems to include everyplace that has universal health coverage. But the magic of the marketplace can get you into plenty of trouble, too. For a good example of when the system doesn’t work, just look at Trump’s relationship with Deutsche Bank, which has given him about $2 billion in loans over the years. Two billion dollars to a guy whose major financial talent seems to be defaulting.

The Times’s David Enrich took us through the story this week. It starts in the late 1990s when Deutsche Bank was a kind of minor league player who wanted to be cool and get into U.S. commercial real estate lending in a big way. Where better to start than Trump? He owned stuff.

via Opinion | Well, Socialism Couldn’t Give Us Trump – The New York Times

David Lindsay is the author of "The Tay Son Rebellion, Historical Fiction of Eighteenth- Century Vietnam," that covers a bloody civil war from 1770 to 1802. Find more about it at TheTaySonRebellion.com, also known as, DavidLindsayJr.com. David Lindsay is currently writing about Climate Change and the Sixth Extinction., as well as singing and performing a "folk concert" on Climate Change and the Sixth Extinction. He can be reached at daljr37(at)gmail.com.
View all posts by David Lindsay Jr →
Quote | This entry was posted in Bullies and Scoundrels, Donald Trump, Gail Collins, Uncategorized and tagged By Gail Collins, Well- Socialism Couldn’t Give Us Trump. Bookmark the permalink.