By The Editorial Board
The editorial board represents the opinions of the board, its editor and the publisher. It is separate from the newsroom and the Op-Ed section. 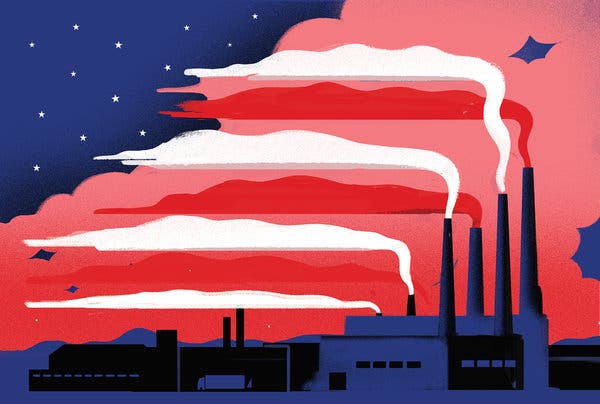 CreditCreditAntonio Sortino
The latest report from the Intergovernmental Panel on Climate Change made it clear that averting the worst consequences of climate changes (lesser consequences are by now all around us) will mean quickly cutting back on the use of fossil fuels that cause global warming.

Big Oil didn’t get the memo.

Faced with what they saw as an existential threat to their businesses, BP, Valero, Phillips 66, the Koch brothers and other members of the fossil fuel fraternity dumped more than $30 million into Washington State to crush a ballot initiative that would have imposed the first taxes in the nation on carbon emissions. Backers of the proposal hoped it would serve as a template for similar action elsewhere and perhaps for the country as a whole. But the theoretical elegance of a carbon tax, which most economists and scientists believe is the surest way to control emissions on a broad scale, was no match even in reliably Democratic Washington for relentless fearmongering about job losses, higher electricity bills and more expensive gasoline.

The defeat in Washington was the most disappointing setback for climate activists in the midterm elections on Tuesday, a day of decidedly mixed messages on climate change in particular and environmental issues more broadly.

David Lindsay is the author of "The Tay Son Rebellion, Historical Fiction of Eighteenth- Century Vietnam," that covers a bloody civil war from 1770 to 1802. Find more about it at TheTaySonRebellion.com, also known as, DavidLindsayJr.com. David Lindsay is currently writing about Climate Change and the Sixth Extinction., as well as singing and performing a "folk concert" on Climate Change and the Sixth Extinction. He can be reached at daljr37(at)gmail.com.
View all posts by David Lindsay Jr →
Quote | This entry was posted in CC Deniers, CC Politics, Uncategorized and tagged Midterm Climate Report: Partly Cloudy, New York Times Editorial. Bookmark the permalink.