Opinion | I’m a Child of Immigrants. And I Have a Plan to Fix Immigration. – By Sonia Nazario – NYT 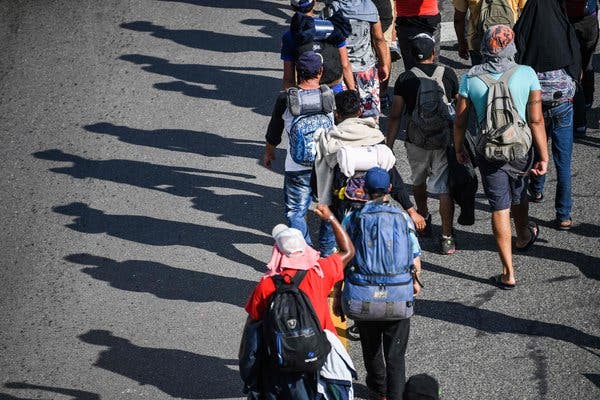 Honduran migrants in the caravan heading to the United States, passing through Chiapas, Mexico, on Oct. 21.CreditCreditPedro Pardo/Agence France-Presse — Getty Images
An immigration lawyer once told me bluntly: Immigration is a wedge issue.

Wedge issues don’t get resolved. They get used by both sides to mobilize their base. Exhibit A: President Trump’s seizing on the caravan of migrants two weeks before the midterm elections. On Thursday news leaked that the president is considering announcing a plan to shut down the southern border entirely for nearly all asylum seekers.

I have covered immigration for three decades. I am the child of immigrants, the only one in my family born in this country. I have twice made the same journey those in the caravan are making, traveling the length of Mexico with Central American migrants. These people deserve our compassion. But I lived in Argentina during the military dictatorship, and I also believe that nations must preserve the rule of law.

For anyone who actually wants to work to resolve the immigration issue — not just use it to bludgeon the other side — I have a plan. Neither Democrats nor Republicans will love all of it. But it is relatively humane and fair, it would keep more migrants at home, where most would rather live and, unlike President Trump’s proposal, it would actually adhere to the rule of law.

. . . . .    The good news is we already know how to reduce violence and corruption, and strengthen good government. In Honduras, the United States has been running pilot violence prevention programs since 2014. In neighborhoods like Rivera Hernández in San Pedro Sula we have funded outreach centers where children can find mentors and help getting jobs, cutting off the gang’s lifeblood: new recruits. We put children most at risk of joining gangs in family counseling. And most important, we went after killers.

In 96 percent of homicides in Honduras in recent years, no one was convicted. Witnesses know: you testify, and the gang kills you immediately. The United States helped fund a nonprofit, the Association for a More Just Society, to investigate all murders in the most violent neighborhoods. They persuade witnesses to testify, anonymously, covered in a black burqa. In Rivera Hernández, murders plummeted by 62 percent in two years. And the number of Honduran children showing up at the United States border was almost cut in half.

via Opinion | I’m a Child of Immigrants. And I Have a Plan to Fix Immigration. – The New York Times

David Lindsay:  This argument makes sense to me.

David Lindsay is the author of "The Tay Son Rebellion, Historical Fiction of Eighteenth- Century Vietnam," that covers a bloody civil war from 1770 to 1802. Find more about it at TheTaySonRebellion.com, also known as, DavidLindsayJr.com. David Lindsay is currently writing about Climate Change and the Sixth Extinction., as well as singing and performing a "folk concert" on Climate Change and the Sixth Extinction. He can be reached at daljr37(at)gmail.com.
View all posts by David Lindsay Jr →
Quote | This entry was posted in Immigration, Uncategorized and tagged By Sonia Nazario, I’m a Child of Immigrants. And I Have a Plan to Fix Immigration.. Bookmark the permalink.