A Time to Kill is a 1996 American crime drama film adaptation of John Grisham’s 1989 novel of the same name, directed by Joel Schumacher. Sandra Bullock, Samuel L. Jackson, Matthew McConaughey, and Kevin Spacey star, with Oliver Platt, Ashley Judd, Kiefer and Donald Sutherland, and Patrick McGoohan appearing in supporting roles. Set in Canton, Mississippi, the film involves the rape of a young girl, the arrest of the rapists, their subsequent murder by the girl’s father, and the father’s trial for murder. The film was a critical and commercial success, making $152 million at the worldwide box office.[2] 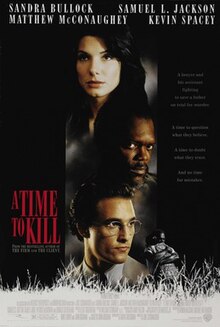 Kathleen Schumaker recommends this film. She liked the movie, and the acting, mentioning Mathew McConaughey and some superb writing.

David Lindsay is the author of "The Tay Son Rebellion, Historical Fiction of Eighteenth- Century Vietnam," that covers a bloody civil war from 1770 to 1802. Find more about it at TheTaySonRebellion.com, also known as, DavidLindsayJr.com. David Lindsay is currently writing about Climate Change and the Sixth Extinction., as well as singing and performing a "folk concert" on Climate Change and the Sixth Extinction. He can be reached at daljr37(at)gmail.com.
View all posts by David Lindsay Jr →
This entry was posted in Uncategorized. Bookmark the permalink.