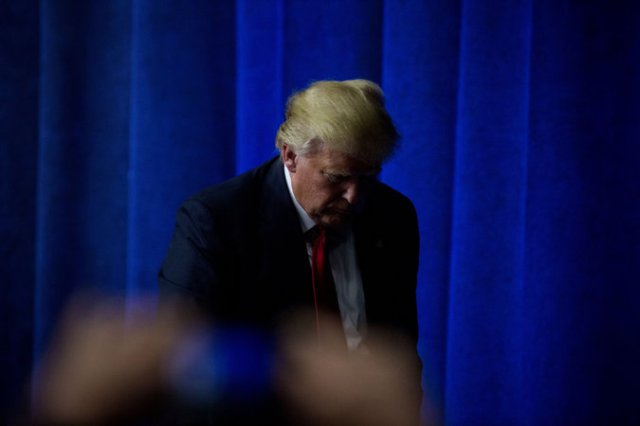 “WASHINGTON — Two weeks ago, Donald J. Trump said he could live with a nuclear-armed Japan and South Korea if it meant they could defend themselves against North Korea without American aid. “I’m not sure that would be a bad thing for us,” he said.Since then he has changed his tune. After Japanese and South Korean officials raised fears of an Asian arms race, and President Obama ridiculed his remark, Mr. Trump began to say he did not actually want the two countries to obtain nuclear weapons — but that, because of American weakness, “at some point it could happen anyway.”It was not the first time Mr. Trump has hastily added deflating caveats to his headline-grabbing trial balloons.In a debate a month ago, he declared himself in favor of torture if it would extract information from terrorists, then issued a statement saying he would respect the law, then followed it up by saying that the law must be changed.”

Source: Donald Trump’s Trial Balloons Are Catching Up With Him – The New York Times

Donald Trump is outragous and dangerous, and he is helping both parties review and remember what American foreign policy stands for and is based on.

David Lindsay is the author of "The Tay Son Rebellion, Historical Fiction of Eighteenth- Century Vietnam," that covers a bloody civil war from 1770 to 1802. Find more about it at TheTaySonRebellion.com, also known as, DavidLindsayJr.com. David Lindsay is currently writing about Climate Change and the Sixth Extinction., as well as singing and performing a "folk concert" on Climate Change and the Sixth Extinction. He can be reached at daljr37(at)gmail.com.
View all posts by David Lindsay Jr →
This entry was posted in Foreign Affairs and U.S.ForeignPolicy and tagged Donald Trump. Bookmark the permalink.