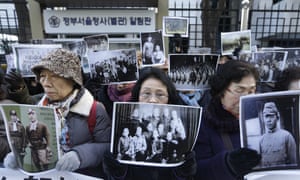 “Shinzo Abe offers sincere apology for use of ‘comfort women’ by Japanese soldiers, removing major barrier to better relationsSouth Koreans protest about Japan’s use of comfort women in SeoulSouth Koreans who lost family members during the second world war demand full compensation and an apology from Japan in Seoul. Photograph: Ahn Young-joon/APJustin McCurry in OsakaMonday 28 December 2015 07.19 ESTLast modified on Monday 28 December 2015 17.30 EST Share on Pinterest Share on LinkedIn Share on Google+Shares3,246Comments738Save for laterJapan and South Korea have removed the biggest obstacle to better bilateral ties after agreeing to “finally and irreversibly” resolve Tokyo’s use of tens of thousands of Korean women as wartime sex slaves.”

David Lindsay is the author of "The Tay Son Rebellion, Historical Fiction of Eighteenth- Century Vietnam," that covers a bloody civil war from 1770 to 1802. Find more about it at TheTaySonRebellion.com, also known as, DavidLindsayJr.com. David Lindsay is currently writing about Climate Change and the Sixth Extinction., as well as singing and performing a "folk concert" on Climate Change and the Sixth Extinction. He can be reached at daljr37(at)gmail.com.
View all posts by David Lindsay Jr →
This entry was posted in Japan, Korea North & South and tagged Comfort Women, Japan, South Korea. Bookmark the permalink.